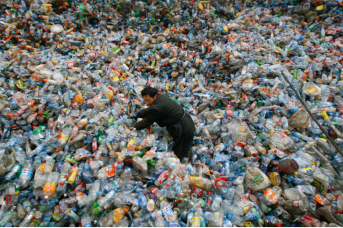 the subsequent pollution caused by it. We look back now at that period of time and say “how could we have let this happen to our rivers and lands”. We now have the luxury of hindsight and know how detrimental the lack of disposal rules and regulations were to our environment. But what will people 100 years from now say about this period of time? How did they not see how the effects of blah, blah, blah would have on our environment. And now I am pretty sure I know what that will be. PLASTIC! It is everywhere and we cannot get away from it and from what I can see, nobody is in any great haste to do something about it.

Start by thinking about the plastic that you use in a day, a week, etc..

Take a day, just one normal day, and go without buying anything plastic. Go to Starbucks and have a cup of something and a bagel. The cup, if you did not bring your own has a plastic coating on it and when you toss it in the recycling trash can (which are usually full) it is contaminated by that little bit of coffee waste. Now have that bagel. You apply it with a plastic knife. The cream cheese comes in a plastic container. It’s only 7:00 AM. You go to work and you are surrounded by plastic containers that hold all sorts of things; toner, paper, electronics to name a few. At lunch you go out to target to buy a new let’s say computer. While it comes in a nice recyclable box, the computer is protected from damage inside the box by styrofoam. Additionally, the computer is shielded from dust and dirt in a plastic bag and the little parts are in hard plastic wrappers. On the way home you have to go to the grocery store, Whole Foods, which is known for being environmentally aware. You buy chicken and it is packaged in a ridiculously huge plastic container and a plastic wrapper. Whole Foods does that you say? You buy fresh vegetables and how do you contain them? Three guesses and the first two don’t count. Plastic bags. And that is just one day.

Walk up and down the aisles in any store.

Costco, Target, Walmart! Hundreds and thousands of pounds of containers that WILL most likely end up in landfills. But I recycle you say. Yes that is a good thing but there are some very specific rules for recycling that I think most people are unaware of. If we as individual consumers of plastic recycled well, the amount of time it takes is astronomical. And if you don’t take the time, your efforts in recycling could all be in vain as contaminated recycling waste can stop production at a recycling plant at a cost of many thousands of dollars to the recycling company, and that waste may end up in the landfill anyway.

Much of our recycling waste is shipped overseas.

Much of it was shipped to China but after 2017, China has refused to accept additional waste. Other countries such as Vietnam, Malaysia or Thailand accept waste but they do not have the infrastructure to handle the huge amounts of waste produced by developed countries like the US, Japan and Germany to name a few. As these other countries refuse to accept more waste, it is stockpiled at the source where as they become over burdened, to create space it is dumped in the landfills, local and abroad. Additionally when some of the aforementioned nations that now accept waste become overburdened, to reduce their storage stockpiles, as there are few restrictions on dumping that waste, it is just dumped anywhere. An ultimately it ends up in waterways and the oceans. Sad!

I don’t think that I, as one person, have any answers.

I look at photos of lands covered in garbage. I look at photos of sea animals, big and small, dying from ingesting plastic or getting plastic stuck on a fin or their nose or in their mouth that causes a slow, painful death. I see plastic “islands” in the oceans that are many miles wide and deep. In my walk this morning of a short two miles, I saw discarded plastic and paper littering the landscape. I never understand how some of this debris ends there. Is it possible that some people are unaware of the detriments of throwing trash to the side of the road or path? Or do they just not care because it does not affect them? Maybe. But maybe the start is to think of ways that you as a single person can reduce your intake of plastic and for the plastic that you do buy, recycle it properly or not at all.

Recycling is not the answer. The answer is to reduce the use of plastic.